For some reason, I’ve been thinking about the barricade scene from Les Misérables. 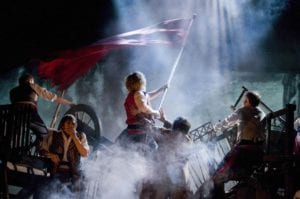 You know, when the guy climbs to the top of the pile of crap and waves a giant flag.

Part of me is thinking, “Are you crazy?! You’re going to get shot!”. The other part of me feels like I wish I had the courage to stand up for something I believe in that much, that I’m willing to stand up and wave a flag on a barricade for it.

The reality is that we do have something we should be standing up and waving a flag for…I know you’re all thinking “Jesus”, cause that’s always the right answer. But I’m imagining something more specific. We have all been made specifically to fit into the Body of Christ somewhere, and with that place in the body comes a responsibility to care about our thing the most…more than anyone else.

I’m a production person in the local church, so the thing I care most about is how we use technology to make our churches more effective. If you’re a worship leader, you’re designed to help bring people to a place where they are worshiping our God.

I meet a lot of people who feel misunderstood by those around them, by the leadership team at their church. They end up spending significant amounts of time wishing that other people cared about their thing as much as they do; or that others understood how things could be so much better.

While often times it might feel like there is overwhelming opposition to your ideas, the reality is that everyone should be trying to make our churches more effective, which means we should all be on the same side of the barricade, fighting with and for each other. Even if this isn’t always the case, typically no one is shooting at you while you stand up and wave your flag.

Having the courage to stand up, sometimes alone, isn’t easy. But things will not change for the better if someone isn’t willing to stand up and lead the charge. Whether it’s for better process, or it’s for better transitions, or it’s for greater emphasis on caring for the poor; if it is something you care about, do something about it. If other people already cared about it, something would have been done already.

God gave you a vision for what something could be. Are you willing to stand up on a barricade and wave a flag about it?