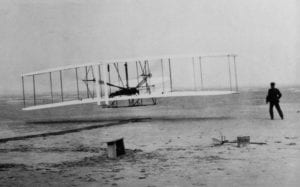 I just finished reading “The Wright Brothers” by David McCullough. What a great story of hard work and perseverance.Also of what can be accomplished regardless of the resources at your disposal.

At a certain point in the book, Mr. McCullough notes that at the same time the Wright Brothers were solving the challenges of flight, the head of the Smithsonian was also interested in the question of man flying. To accomplish one powered flight experiment, Mr. Langley had access to $50,000 from Congress, $20,000 of his own money, and $20,000 from a friend. The result? A plane folded in half after takeoff and fell into the Potomac River.

Several hundred miles away, Wilbur and Orville were flying successfully for about $1,000 of their own money. And not just for that one experiment, for all their experiments from 1900-1905. All the gliders, the wind tunnels, the custom fabricated aluminum engines. All of it, for a little over 1% of the amount spent by the fully funded group.

This got me thinking about church production…like most things do. Having resources is great. I worked at Willow Creek Church for over 10 years and know that having the proper resources go a long way in getting things done. I believe there is also a downside to having very few resource limitations.

For the Wright Brothers, it forced them to do a couple of things that we can all learn from.

With fewer resources, Will & Orv were forced to solve complex problems with simple solutions. With little funding, they had to come up with ideas that could be built in their bicycle shop.

When I worked at a church that met in a high school, not only did we not have a ton of money, we had very little time to get things set up and torn down. As a result, one of the defining characteristics of our solutions is that everything had to be a one-person job. This allowed us to get the job done. Once we moved into our own building and removed the time constraints, we started adding 2 and 3 person jobs, which tended to make matters more complex.

Having fewer resources force you to think creatively about simple solutions.

Being forced to think about how to do something differently helps make for better results. If all you have to do is throw money at a problem, you haven’t taken a step back to think about the best way to get it done. You’re just doing your first idea.

A friend of mine works at a church where money has never been a problem. As a result, anytime someone wants to start a new ministry or create a new event, they do it because they can afford to. However, after years of this, people are starting to wonder if “just because you can” is a good enough reason to do something.

For the Wrights, they realized that they had to solve the challenge of gliding before they stuck an engine on anything. If they could glide easily, then adding power to it would more than likely work.

For the Smithsonian, they skipped right over the glider part and loaded down their flyer with tons of power to overcome the deficiencies of their plane.

Next time you wish you had more money to spend on a project or on a service, remember all the Wright brothers were able to accomplish. Our world was changed by their commitment to simple solutions to complex problems to achieve the best results.

If they could do it with 1% of the resources, what could you do with what’s been entrusted to you?