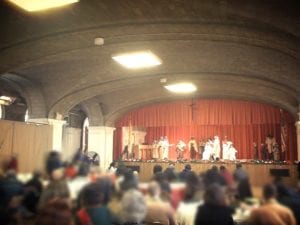 The worst. Right? You’ve just given everything you have to the giant production called Christmas Eve services, and now it’s the weekend again. Give me a break!As I was reflecting on this familiar feeling, it dawned on me that church production people everywhere are in the same boat here. Maybe your church canceled Saturday services, but most everyone has something on Sunday. As you drag yourself in to get ready for another rehearsal for another service, here’s something to think about…

All of us were a part of sharing the gospel with millions of people this past week. Millions! As our churches filled up with people who wouldn’t normally come to church on a normal weekend, we help to facilitate the message of Christ to be taught and heard for maybe the first time.

The work you did, helped countless people forget that technology was involved at all, and were able to focus on the content of our services. The countless hours of preparation; the long list of things you neglected in December; the sacrifice your family gave in order for you to give something extra for your church congregation…all of these things helped contribute to people connecting with God in new ways.

As you enter into the building for the first time after all those Christmas Eve services, remember that God created you to be the first one in and the last one out. Without you, many of those moments that people had with God wouldn’t exist. God has chosen you, and made you uniquely for the purpose of creating environment for Him to move in people’s lives.

Now go watch Episode VII and you aren’t completely exhausted. Make it 3D IMAX while you’re at it. You’ve earned it.