Clarity and accuracy of statement are mutually exclusive. – Niels Bohr

Niels Bohr won the noble prize in 1922 for his work in atomic structure and quantum mechanics.  To simplify:  he was a rocket scientist before there were rockets. 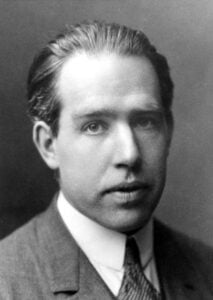 Here’s a guy that understands the mysteries and complexities that most normal humans can’t even begin to fathom.  It doesn’t seem like a shock that he would struggle to communicate what is going on at the atomic level to normal everyday people.  He could either be clear and simple, or accurate.

As a technical artist in the local church, I am always trying to figure out better ways to communicate to those above me, so they can understand.  When something goes wrong, how do I reduce the complexity into an understandable statement?  When it is time to replace a piece of equipment, how do I communicate the reasons that make sense for the organization?

Before reading this quote, I would say I had been shooting for both clarity and accuracy at the same time.  Now the challenge seems like figuring out the balance between the two…or is it one or the other, which is what mutually exclusive means.

It is important for our churches, that we figure out how to lead up.  That we are able to fulfill the role we have in the body of Christ and provide our leaders with the information they need to help make great decisions.  Communicating with an accurate statement usually gets non-technical people lost.  Sometimes communicating with clarity feels like not I’m not offering enough information.

One of the things I have learned over the years is the importance of leading up; the necessity of speaking in a way that leadership can understand what I am saying.  As a technical person, it can be easy to speak in dBs and foot-candles, which don’t mean anything to anyone not involved in production.  I have spent a lot of time trying to craft statements and ideas in ways that are understandable to the people leading me.

This idea that clarity and accuracy of statement can’t exist in the same space, is freeing to me.  It isn’t about trying to cram everything into a statement that is clear, but it is about trying to be as clear as possible.  It is important to understand the topic enough to speak with accuracy, but it is only necessary when asked to be more specific.

As you try to lead up to those above you, are you trying to be as accurate as possible, and probably losing people’s understanding of the words you are saying?

Or are you able to communicate with clarity, and not worry about the intimate details that just bog down the big idea?

Most of us technical people don’t need help with the “accuracy of statement” side of things.  We understand the situation in minute detail.  But, if we are going to be effective at our roles as technical artists in the local church, we need to become masters of restraint, so that we communicate with clarity.