Remember that one time your monitor mix wasn’t perfect, but you just gave up trying to ask for changes.  “I can deal with this.”? 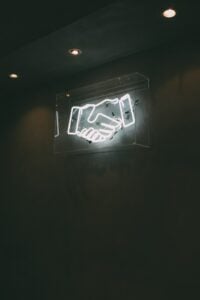 Photo by Charles Deluvio on Unsplash

Or that other time when you got graphics late on Saturday night, even though you keep asking for them on Friday afternoon and you just decided that since you always get them this late that you should just adjust your schedule?

Or that one time…

I’m pretty sure we all have stories when we have decided that things would be better if I just got used to this.  I’m tired of bringing this up all the time, so I’m just going to stop asking for what I need and adjust.

This is a truce of sorts, but it is unbalanced.  You have decided to give in, without the other person having the option of doing their part.  In my opinion, an unbalanced truce leads to bitterness and resentment.  It is what turns most tech people into passive-aggressive, negative people that are difficult to work with.

Here’s the thing.  Deciding to give in and just deal helps in the short term.  I would even say that in the moment, getting the job done is the most important thing.  For those of us in the technical arts, when it is “showtime”, there isn’t time to argue about the process or how you hurt my feelings or whatever.  It’s time to get it done and deal with it later.

Unfortunately what happened to me over the years is that I would forget to follow up, or the intensity of my feelings had diminished and it didn’t seem like a big deal anymore.  Then it would happen again, and since I hadn’t dealt with it, the resentment built up.  But it’s “showtime” again, so let’s just get it done.

Being flexible in the moment is super important, but for me, it had become less about being flexible and more about not dealing with the uncomfortable conversations required to make sure we didn’t find ourselves in the same situations each week.

Having an effective working relationship with people requires lots of hard work and trust.  When we settle for an unbalanced truce, our trust levels start to decrease and we can become bitter with our situation.

I need to commit to myself to go after the actual truce; to fight for real trust and an actual effective working relationship with those around me.  And not during “showtime”.  I need to invest when the pressure is off.

Where have you given in and settled for something, instead of pushing for what’s best?