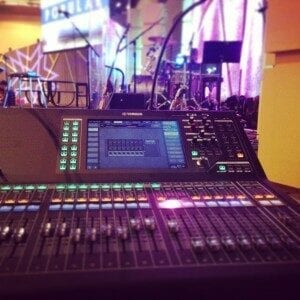 I ran monitors the other day. Don’t tell anyone, but it was the first time I had done real monitors with IEMs in my life. Not only that, but on a console I had never touched until that day.

I’ve lost track of how many times I’ve been at FOH, and I used to run wedge mixes from FOH exclusively. So the idea of monitors wasn’t new to me, nor the act of giving artists what they think they want 🙂

I’m pretty sure I did OK. I guarantee that there are many others who are better than me, but I think ministry happened, and I was a part of the team helping to facilitate the experience of hundreds of middle school students.

Upon reflection, I had two major feelings after my experience.

I had so much fun creating. Building mixes for people. Helping them experience the music so that they could help lead the group. It was a thrill to be a part of facilitating worship from a more hands-on perspective. I’ve spent the better part of a decade leading technical artists, which is an art to itself. But getting my hands “dirty” brought back so many great memories, including why I fell in love with production.

The second feeling was gratitude for the grace that the team showed me. There were bumps along the way. There were “gremlins” in the system…either that or operator error. There was definitely a team spirit to create something together, and we were all in it with each other.

If we hope to build our teams and to eventually move from where we are to expand to somewhere better, we need to leave room for people to learn and grow. Instead of just empowering one superstar tech person, we need to open things up to create opportunities for those people that have potential but need a chance to learn.

Giving your team a chance to learn means that mistakes will happen, but creating a grace-filled environment will help our teams achieve more and more.

I have to say that Arnez, the TD of Elevate, Willow Creek’s Jr. High ministry, has done a great job creating an atmosphere of “let’s try it!” It is that spirit that gives people room to figure out new things with a safety net of grace.

The worship leader, Delwin, also made me feel at home and a part of what was happening. As I watched him coach his band, and interact with me at monitors, he pushed us to do our best, even to try harder at times. But the overarching vibe was one of grace and team.

If only each one of our experiences serving could have been as amazing as mine was this past weekend!

What are some ways we can create opportunities for our teams to feel fully empowered to serve? How can we create atmospheres full of grace?