I was just at an event where I observed people interacting with each other on a 50/50 basis, and it was fascinating how some people wanted to do their half, but more importantly, wanting the other person to do their half first. 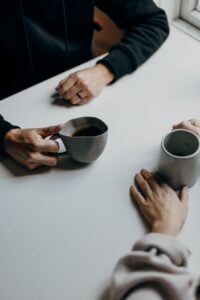 What I’ve noticed in my own life, is that waiting for someone to meet me halfway never really works out.  Trying to be fair, doing my half, putting in just enough effort to make a relationship work…all these things have led to me being discontent.

In the middle of all this, that verse about Christ and him not considering equality with God something to be grasped came into my head.  I looked it up (Philippians 2) and was amazed:

5 In your relationships with one another, have the same mindset as Christ Jesus:

6 Who, being in very nature God,
did not consider equality with God something to be used to his own advantage;
7 rather, he made himself nothing
by taking the very nature of a servant,
being made in human likeness.
8 And being found in appearance as a man,
he humbled himself
by becoming obedient to death—
even death on a cross!

Christ didn’t wait for God the Father to meet him halfway, he gave himself up fully, way past any relational requirements I have to worry about.

Whether it is with your spouse, a co-worker, a tech volunteer, a worship leader, or your senior pastor, working for halfway will never satisfy.  Waiting for someone else to do their half will leave you disappointed.

If you and I were standing in opposite endzones of a football field, the 50 yards closest to me seems way more than yours.  Knowing where halfway is, from my perspective is nearly impossible.

Go the full distance.  Be the one who meets people where they are.  Serve the other person without wanting there to be a halfway mark or someone keeping score.