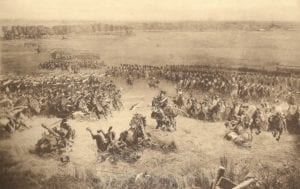 I’m pretty sure you’ve figured out by now that I love history. I can’t get enough of it! There are so many lessons from the events of the past that can be learned from and I like thinking about ways to apply these lessons to my own situation.

I just finished reading an account of the battle of Waterloo, the defining battle between Britain and France to close out the Napoleonic Era Wars. There are a bunch of great leadership lessons in the whole scope of this part of history, that could probably fill blog entry after blog entry.

For the purposes of this blog, we are going to look at just one.

In 1815, the musket was still by far the weapon of choice for the infantry. With luck, they could fire 3 shots in a minute. That’s during perfect conditions. The other big challenge with muskets is they were highly inaccurate. The further away you get from your target, the more likely it was that you were going to miss your target.

Not that war is ever pretty, but this slow rate of fire made it very ugly for the people trying to stay alive. Often times you had to wait until the enemy was very close before you fired to make sure you actually hit something. Then they were right on top of you, which meant you got your bayonet ready and charged ahead. Frankly, I can’t even imagine it.

During some of these battles, it could be very easy for officers to stay back and let their men do all the work. The soldiers in the trenches knew which officers had their back and which didn’t. Here’s a great excerpt from the book I just read:

Officers were expected to lead by example. Rifleman Costello, of the 95th, said the troops divided officers into two classes, the ‘come on’ and the ‘go on.’ “And with us,” he said, ”the latter were exceedingly few in numbers”. Rifleman Plunket once told an officer, “The words ‘go on’ don’t befit a leader, Sir.”

The Duke of Wellington, who lead the Allies to a successful victory over the French always seemed to be where the action was, leading his men by example. Did that mean that he was doing front-line work? No. It did mean that he wasn’t afraid to get his hands dirty, also no.

For me personally, this is a really difficult line to find. How do you make your team feel like you are in it with them, and not get buried by the details and miss the big picture that all leaders need to pay attention to?

‘Come on’ implies that you are leading the charge, and fortunately, in our case, it generally isn’t to fill the breach. If you are starting a new initiative, are you willing to do what it takes to set an example for your people? If some hard work needs to be done, are you willing to jump in and stay until it gets done?

‘Go on’ suggests that you can’t be bothered. It implies that you are above what needs to be done. ‘Go on’ makes me wonder if you are committed to what we are doing…like you are hanging back to see what happens. Maybe so you can blame the failure on someone else, or perhaps so you can take the credit if it succeeds.

In the example of the battle of Waterloo, a classic example of ‘go on’ was William, Prince of Orange of the Netherlands. Wellington was forced to put him in charge of many of his troops, and the prince ended up sending many of his men to their death. He was at the back telling them to ‘go on’ and attack the French, making poor decisions and not thinking of his people but only his only glory. How hard can it be, just go get ‘em! The only thing that eventually stopped the slaughter of the Prince of Orange’s men was the Slender Billy getting shot and taken off the battlefield.