Have you ever noticed that the stereotype for production at events involves a microphone not being on, followed by feedback? I always get annoyed when I am watching a movie or a TV show where this scene is acted out. It is so cliche and predictable, and so true so much of the time. 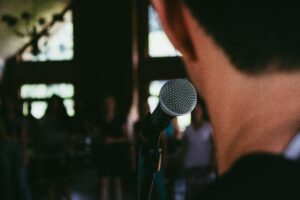 I was at an event a while ago, and I saw all this play itself out.  The technical botches went beyond mics not being on but included poor lighting and less than wonderful graphic work.  People are so used to going to events where this happens, that it is accepted as normal.  So normal, that it is part of pop culture.

As a technical artist, I put a lot of effort into changing this generalization by making any production I am a part of invisible, seamless with what is happening on stage.  It’s not always wiz-bang or the most cutting-edge technology, but it is always using technology to advance the event/service to a higher place. This includes having mics on when they should be, lighting something up that should be lit, or pointing a camera where the focus needs to be, but it also means something much more.

To take this one step further, if production is only about hitting every cue right, pointing lights in the right spot, or having a mic on at the right moment, we are missing so much of what production can be about.  I have been thinking about U2’s current tour and how breathtaking the production is.  Now if the same set and same lights and same everything were applied to a high school battle of the bands, we would all say the production distracted from the content of the event (or maybe vice versa).  For U2, the production supports, nay, enhances the content that U2 is bringing to the party.  Does this happen because there are some gear happy tech people in a dark room deciding what the production should look and feel like?  Definitely not.  What’s happening here is U2 is partnering with some amazing production artists to create an entire experience for thousands of people.

Now, I would wait in line to hear U2 play at the Penny Road Pub down the street without much production, and it would be amazing.  But with the combined efforts of the members of U2 and their production team, they can create an experience like none other for thousands of people at once.

Let’s take this one step even further.  What if we used the technical arts, not for the sake of using cool gear, or trying to be the U2 360 Tour, but for the sake of enhancing the message of Christ.  Not changing the message.  Not creating our own message.  Not enhancing it into something totally distracting.  But working closely with the people creating content to craft a life-changing experience for people, together.

Production without content is like the battle of the bands using U2’s stage:  a huge waste.  And content without production is like seeing U2 at the Penny Road Pub:  good, but not all it could be.  But content, enhanced by the artistic use of production is a powerful combination.