A few years ago, I ran into an audio engineer that I used to work with.  After introducing him to the people around me, he started to tell a story that began with, “My biggest memory of Todd was…”.  I remember thinking, “Oh, crap.  What is he going to say?!”  To my relief, here is basically what he told everyone:

We were in the middle of a service and a particular song started.  Pretty soon into it, Todd leaned over to me and said “strings!”  I responded by bringing up the fader for the strings, while mentally kicking myself for missing the cue.

While I was settling into the mix, Todd leaned back over to me and said “vocals”.  I had been so caught up in missing the strings, that I had forgotten to bring up the vocalist’s mic.

At this point in the story, I am wondering what the punch line is going to be…

I couldn’t believe how calm Todd was, even after I missed the second cue.  I so appreciated not being yelled at and berated.  I was already feeling awful about messing up, and Todd’s response helped me to move on and continue mixing.

As a leader, this situation reminded me of 2 things that matter to me in situations like this and that follow this particular rule of General Powell. 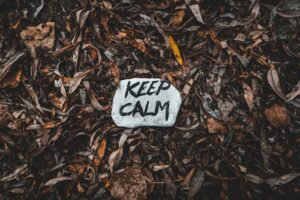 Photo by Cory on Unsplash

The first time I saw the “Keep Calm and Carry On” posters that are now everywhere, I couldn’t believe it.  I have been in the habit of saying this to myself for years and suddenly its on a coffee mug.

People look to the leader to see how they respond when all hell is breaking loose.  Am I going to lose my cool, or am I going to calmly solve the problem?

In this example with the audio engineer, I can remember freaking out that we had missed the string quartet cue, but that me yelling at the guy at FOH would probably just fluster him  more than he already was in that moment.

I figure that most people want to do a great job.  He didn’t want to screw up, so telling him to not screw up doesn’t feel like the right answer.  Freaking out would not have solved anything.  In my opinion, freaking out usually just makes things worse.

I have worked in a few environments where people were motivated to do their very best out of Fear.  Fear of screwing up.  Fear of disappointing someone.  Fear of being yelled at.  These all feel less than ideal to me.

As a production leader, I am pretty aware that I couldn’t mix as well as this particular engineer.  I was also aware that our team/church really needed him to bring his best to our services.  If he were living in fear of me coming down on him every time he screwed up, pretty soon he is working to just not screw up, versus bringing his best for the sake of bringing his best.

There might be more control associated with coming down hard on people, and a little less control involved with people bringing their full self to the table.  You name the day, and I would take people bringing the entirety of who they are and what they can do, and deal with the messiness that comes with it.  I want people to be motivated internally, not by some heavy hand that will squash them when bad things happen.

I know that I want to bring my full self to whatever I am doing, so how can I lead in such a way that encourages that from others?