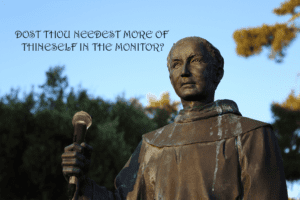 “I’m always surprised how pastoral being a church TD is!”

This is a text I got from one of my friends who is a technical artist in the local church. It couldn’t be more true…in two ways: That being a TD is pastoral and how surprised we are by it.

For many of us, we love the gear. We totally geek out on the newest plug-in or some new set design. It is how God made us. We wouldn’t be technical artists without loving this stuff. We wouldn’t be hired at TD’s if we didn’t. However, to thrive as a TD in the local church, we have to look past the gear to the people, the people that make it all happen…volunteers.

At almost every church I’ve been involved in or have been to, the whole thing would fall apart without volunteers; people who love technology and that have realized that God made them specifically to fill a role in their local church.

I have a theory that many people decide to volunteer because they love the stuff. They love the gear and getting the chance to use it. After a while, they stop coming because the gear is cool. After they’ve used it for a while, that doesn’t matter as much to them. What keeps people coming back is the relationships they have with other team members and the TD.

Whether we like it or not, your job as TD just became about relationships. OK, maybe not just, but maybe it’s a new revelation to you. If you’re not spending time building into the people on the team, the team won’t last very long.

Many times these things are in conflict with each other. It is up to each of us to figure out the balance between making sure the gear is working and that people are cared for. There isn’t a right answer to this, but it is a pendulum that needs to swing back and forth depending on the needs of the moment. But, if you can pour into people, then you can start building something.

If all you do is the gear then you’ll be alone running around trying to keep up with it all. Eventually, you will burn out, and I’m pretty sure that God never wanted that when he created you for the technical arts.

Todd is a writer, speaker, technical artist in the local church and founder of FILO.
Previousmaking time for the future
Nextbringing hope through technology
Return to Blog