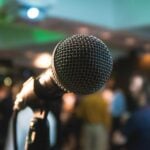 I don’t love talking in large groups…OK, maybe I do like it, but I never like that feeling of not knowing exactly what to say. Yesterday I needed to stand up in front of a group and was really not sure what to say. I wrote myself a couple notes, I stressed about it, and even got some sweaty palms. When it came time to open my mouth, I am not sure that anything profound came out, but words definitely came out that I hadn’t planned on. Afterwards, I realized that I had stepped up to what I needed to be about, I had even prepared to make it the best possible (which still felt like not enough) and God had showed up to make up the difference. After it was all over I was sitting in the services and realized that if nothing else, people get a chance to see what I think and feel instead of me being the only one who knows.

If I want the culture at Willow to be one that I am proud to be a part of I need to keep stepping up to these chances to speak into the culture, even when I don’t like the feeling of not knowing exactly what to say. If I am obedient, God will show up.