tech teams vs. the 2nd law of thermodynamics 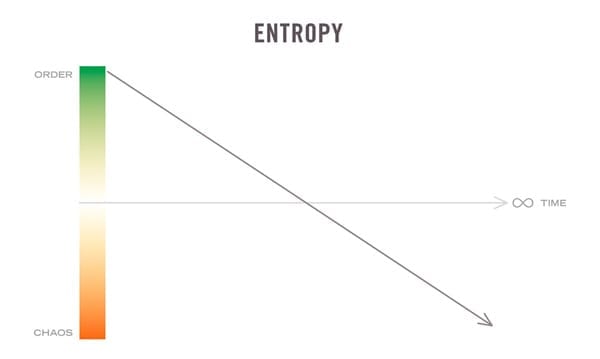 As engineering students, we were all required to take the class Thermodynamics. By itself, this is a tough subject matter, but the professor we all had was a cross between a fire and brimstone style preacher, and a drill sergeant. While he made the course fairly entertaining, it was even more intense than just the subject matter by itself.

You might be wondering what my thermodynamics class has to do with production in the local church. Besides the fact that they make up the fundamental laws that our entire existence is based on, there is a point.

I had the privilege of serving on a team at a local church recently. The team was made up of some pretty long-term volunteers. When I asked one team member how long they’d been serving, he said “Only 8 years.” I think I laughed out loud! ONLY 8 years! Where’s your dedication?! (sarcasm)

As I got to know the other team members, they had all been serving for quite a while also. They knew how to do the task at hand and what was expected of them. They knew the rhythm of the services and how to do their collective assignment well. Being the new person, I know that I would not have succeeded without them.

(Now if you’re a purist student of physics, you know that this language hasn’t been used in a while, but for those of us non-physicists, I think it still works…especially for the sake of this blog post.)

Going back to the team I served with recently, I’m excited to visit them after they have an established leader again. It will be fun to see how consistent energy turns them into a high-functioning team again.

Todd is a writer, speaker, technical artist in the local church and founder of FILO.
Previouswhat is it about january 1st?
Nextthe next big thing
Return to Blog