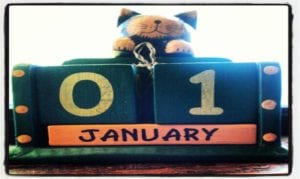 What is it about the date January 1st? In some ways, it feels like such an arbitrary moment in time, yet it gets everybody looking back on the year that just happened and looking forward to the year ahead.

I’ve been sitting here reflecting on some of the years that have gone by…with relief that they are in the past. There were some tough years in there. Yet for other years, I wouldn’t mind repeating them because they were so good.

In reality, I bet that my good years weren’t really all that great and the bad years weren’t probably as bad as I remember. Either way, the things that happen each year and how I responded to them have made me into who I am becoming.

When I look back on 2014, I’ve had quite a few changes, the least of which is stepping away from what seemed like a perfectly amazing job. For someone who is a leader in the technical arts community, working at one of the premier churches for production excellence, it only makes sense to hang onto that job as long as possible.

That was a wrestling match I had with God early in 2014. It took months of struggle to get myself to a place where I was hearing God say, “Are you willing to follow me, or not?”

In this area and a few other personal issues this year, my faith has gotten to a “where the rubber meets the road” kind of place. If I say I’m a Christ-follower, am I actually willing to follow? Regardless of the circumstances or of the ridiculousness of the request, how does me being a Christ-follower actually inform my decisions?

I think I will look back on 2014 and see it as a year of my Christian faith leaving the realms of theory and moving into practice. Instead of going through the motions each day, actually asking the question “What does God have for me today?” and then trying to do that.

One of the hardest years? Probably.

One of the most fulfilling years of seeing God show up in real ways in my life? Most definitely.

At my going away party at Willow (which was at the Texan, the place where production staff has their last meal), there was a giant table that seemed far too big for how many people I thought would be there. Instead, they kept moving more tables and chairs over.

As I sat there, I was struck by the impact God has had through me on the lives of the people around that table.

At my going away party at Kensington all those years ago, the table was smaller, with fewer people…some of my favorite people, but fewer of them.

If I had not been willing to follow God 11 years ago to leave where I was and follow him, his ability to use me would have been lessened.

At both parties, I told those gathered that if you feel like God is calling you to something, you should do it. Figuring out if God is the one calling you isn’t easy, but if He is, are you willing to follow?

Looking ahead to 2015, I have lots of dreams and some pretty big plans. All of them are untested and with the outcome in some doubt. But if I try not to get too wrapped up in what my blog post will say one year from now, I believe that what happened in 2014 has set me up for an amazing 2015.

Some of my big plans for this next year involve our community of church technical artists and I can’t wait to start talking more about it. But for now, I’m trying to soak up all the amazing things God did in 2014.