I like lots of top light on the band.

I like to feel the kick drum in my chest.

These are my preferences and are just the tip of the iceberg. I’m only one person on a team of people with preferences of their own. So…whose preferences matter? Whose don’t?

If our services were put together based on everyone’s preferences, we probably wouldn’t even have a service. Or at least we would have a service that nobody really liked.

So what do we do? Who decides? 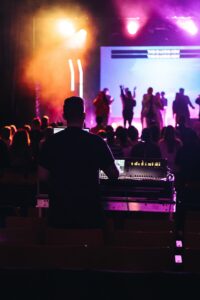 Photo by Michael DeMarco on Unsplash

In our world today, there is such a high premium placed on the idea that everyone’s opinion matters, so this might feel pretty counter-cultural, but unless the leader decides, we won’t really get anywhere important.

From the very top of your organization, for many of us, that’s our church, there needs to be a very clear idea of what we are trying to do. Not that the senior pastor needs to decide band arrangements or anything that detailed, but at the least they need to have empowered someone to make those decisions.

Then that person needs to empower her/his team to make the decisions necessary to pull a service together. But at the end of the day, someone needs to say what’s most important. When values clash, and they will, who decides the best way to go?

All of our situations are different, but regardless there should be someone we can look to for direction in those moments. When the audio engineer has a preference that clashes with the preference of the band leader, or the lighting designer as an idea of how dark it should be on stage that doesn’t line up with what the video director needs, who decides? I can tell you that it shouldn’t be those individuals, because we would never come to a decision.

If it is your job to decide, don’t make every decision, but help your team by arbitrating on values. You need to be the one to pick which value matters most in a given moment. It is up to you to develop a point of view and share it with the team often. As it turns out, your preferences matter the most. It might feel odd, but it is true.

Now, if it isn’t your job to decide, then get out of the way. Serve up your preference, but let your leader make the final decision.

My impression is that many of us tech people like to make decisions about audio or lighting or video that really aren’t ours to make. Work with your leader to figure out what you can decide and what you should defer to them on.