Why do you do a good job?  What motivates you?  In the realm of live production, different things drive different people.  In the church setting, you have people who are motivated by the chance to help spread the Gospel through the use of technology.  Some people want to fly under the radar and not take risks.  Some are so burnt out, it is hard to figure out why they are still doing it at all.

But what about doing great work?  I mean doing some amazing work.  For those who are doing it, what motivates you to perform at the top of your abilities, to do your very best?

This is not a “Jesus” answer, question.  I’m not trying to over-spiritualize the topic here. 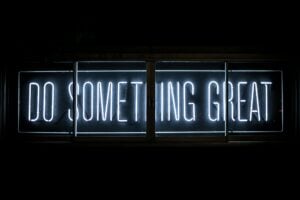 Photo by Clark Tibbs on Unsplash

As a leader, I’m often thinking about how to get the best out of people.  In my experience with live production, I have noticed leaders motivating their production teams to great performance in one of two ways: out of a fear of failure, or freeing people up to bring their very best of who they are.

Let’s tackle the first one:  Doing great work by not failing

If creating a distraction-free environment is one of the things you are trying to create, of course, you don’t want mistakes to happen.  We’re attempting to remove all obstacles from people’s experiences.  If you are a gifted technical artist, this should be one of your core values.  However, not making mistakes is not all there is.

We used to have a joke here that would involve someone saying right before we started an event “Don’t screw up!”.  It was meant to be funny, but as my wife would say, all kidding is a half-truth.

Whether we mean to or not, we had created a culture where fear of being yelled at was the motivation for doing your best work.  I don’t know about you, but I’m pretty sure nobody does their best work by wondering when they are going to screw up next.

I believe that doing great work comes from a much deeper place than the immediacy of potential failure.  We’ll talk about that in the next post.

As you lead your teams, what motivates them?  Is it a culture of fear of failure?